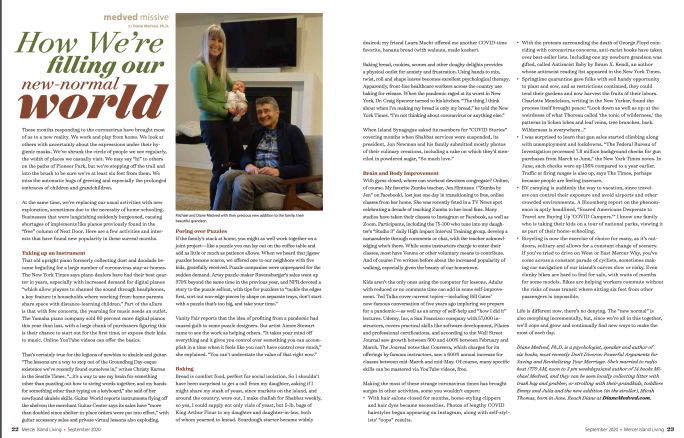 This is my column from the September, 2020 issue of Mercer Island Living, pictured here.

These months responding to the coronavirus have brought most of us to a new reality. We work and play from home. We look at others with uncertainty about the expressions under their hygienic masks. We’ve shrunken the circle of people we see regularly, the width of places we casually visit. We may say “hi” to others on the paths of Pioneer Park, but we’re stepping off the trail and into the brush to be sure we’re at least six feet from them. We miss the automatic hugs of greeting and especially the prolonged embraces of children and grandchildren.

At the same time, we’re replacing our usual activities with new exploration, sometimes due to necessity of home-schooling. Businesses that were languishing suddenly burgeoned, causing shortages of implements like pianos previously found in the “free” column of Next Door. Here are a few activities and interests that have found new popularity in these surreal months.

Taking up an Instrument

That old upright piano formerly collecting dust and doodads became beguiling for a large number of coronavirus stay-at-homes. The New York Times says piano dealers have had their best quarter in years, especially with increased demand for digital pianos “which allow players to channel the sound through headphones, a key feature in households where working-from-home parents share space with distance-learning children.” Part of the allure is that with few concerts, the yearning for music needs an outlet. The Yamaha piano company sold 60 percent more digital pianos this year than last, with a large chunk of purchasers figuring this is their chance to start out for the first time, or expose their kids to music. Online YouTube videos can offer the basics.

That’s certainly true for the legions of newbies to ukulele and guitar. “The lessons are a way to step out of the Groundhog Day-esque existence we’ve recently found ourselves in,” writes Christy Karras in the Seattle Times. “…it’s a way to use my brain for something other than puzzling out how to string words together, and my hands for something other than typing on a keyboard,” she says of her newfound ukulele skills. Guitar World reports instruments flying off the shelves; the merchant Guitar Center says its sales have “more than doubled since shelter-in-place orders were put into effect,” with guitar accessory sales and private virtual lessons also exploding.

If the family’s stuck at home, you might as well work together on a joint project—like a puzzle you can lay out on the coffee table and add as little or much as patience allows. When we heard that jigsaw puzzles became scarce, we offered one to our neighbors with five kids, gratefully received. Puzzle companies were unprepared for the sudden demand. Artsy puzzle-maker Ravensburger’s sales went up 370% beyond the same time in the previous year, and NPR devoted a story to the puzzle sellout, with tips for puzzlers to “tackle the edges first, sort out non-edge pieces by shape on separate trays, don’t start with a puzzle that’s too big, and take your time.”

Vanity Fair reports that the idea of profiting from a pandemic had caused guilt to some puzzle designers. But artist Aimee Stewart came to see the work as helping others. “It takes your mind off everything and it gives you control over something you can accomplish in a time when it feels like you can’t have control over much,” she explains. “You can’t understate the value of that right now.”

Bread is comfort food, perfect for social isolation. So I shouldn’t have been surprised to get a call from my daughter, asking if I might share my stash of yeast, since markets on the island, and around the country, were out. I make challah for Shabbat weekly, so yes, I could supply not only vials of yeast, but 5-lb. bags of King Arthur Flour to my daughter and daughter-in-law, both of whom yearned to knead. Sourdough starter became widely desired; my friend Laura Macht offered me another Covid-time favorite, banana bread (with walnuts, made kosher).

Baking bread, cookies, scones and other doughy delights provides a physical outlet for anxiety and frustration. Using hands to mix, twist, roll and shape loaves becomes excellent psychological therapy. Apparently, front-line healthcare workers across the country use baking for release. When the pandemic raged at its worst in New York, Dr. Craig Spencer turned to his kitchen. “The thing I think about when I’m making my bread is only my bread,” he told the New York Times. “I’m not thinking about coronavirus or anything else.”

When Island Synagogue asked its members for “Covid Stories” covering months when Shabbat services were suspended, its president, Jon Newman and his family submitted mostly photos of their culinary creations, including a cake on which they’d stenciled in powdered sugar, “So much love.”

With gyms closed, where can workout devotees congregate? Online, of course. My favorite Zumba teacher, Jen Hintnaus  (“Zumba by Jen” on Facebook), lost just one day in transitioning to free, online classes from her home. She was recently feted in a TV News spot celebrating a decade of teaching Zumba to her local fans. Many studios have taken their classes to Instagram or Facebook, as well as Zoom. Participants, including the 75-100 who tune into my daughter’s “Studio 3” daily High Impact Interval Training group, develop a camaraderie through comments or chat, with the teacher acknowledging who’s there. While some instructors charge to enter their classes, most have Venmo or other voluntary means to contribute. And of course I’ve written before about the increased popularity of walking, especially given the beauty of our hometown.

Kids aren’t the only ones using the computer for lessons. Adults with reduced or no commute time can add in some self-improvement. Ted Talks cover current topics—including Bill Gates’ now- famous conversation of five years ago imploring we prepare for a pandemic—as well as an array of self-help and “how I did it” lectures. Udemy, Inc, a San Francisco company with 57,000 instructors, covers practical skills like software development, Pilates and professional certifications, and according to the Wall Street Journal saw growth between 300 and 400% between February and March. The Journal notes that Coursera, which charges for its offerings by famous instructors, saw a 600% annual increase for classes between mid-March and mid-May. Of course, many specific skills can be mastered via YouTube videos, free.

Making the most of these strange coronavirus times has brought surges in other activities, some you wouldn’t expect:

Life is different now, there’s no denying it. The “new normal” is also morphing incrementally, but, since we’re all in this together, we’ll cope and grow and continually find new ways to make the most of each day.